He used to have a cat

Florencio is the son of Antonio also known as the Violinist, an violin wielding hunter from the asymmetrical survival game called Identity V. Like his father, he is a violinist.

Florencio was a talented young man with a humble heart, he is also a reserved person and he only expressed his current emotions through his violin just to avoid being overly expressive personality like he used to be which results in constant bullying in his freshman years.

Florencio was a nice person to every people he encounter which making some girls fell in love for him which is the reason why sometimes he had a fight with Antoinette,

Before Antonio got jailed, he a wife and son which is apparently Florencio, they are very close to each other and shared their love of violin making him a musical prodigy at a young age like him, however his wife and him always quarrel due to his gambling issues and when she can't take it anymore because of his debt, she left for good.

After that they moved to Hungary to live a life there and then his mother married to someone who also abused him behind her mother's back. or even mock his talent as a useless thing. When he was 13 ,he ran away from his home for good to break free from the abuse even thought it ill hurt his mother's feelings and he began to use his skills to get coins on street because of how good he is, the royalty noticed his talent, so they hired him as their musician which he gladly accept but that opportunity turned out to be hell as well as a trap.

The royal family won't let the boy leave the palace, to make sure he won't get out, they placed him in the palace's tower and 2 guards was In front of his door. When he became ill, he tried to ask the royalty to stop imprisoning him because of how sever his illness is but they refused because they thought he is faking it to get out. Days after, Florencio was laying on his bed with a letter on his hand (A message for the girl he met in the a ball) looking pale and lifeless while his had has blood on it indicating that coughed blood. After the royal family seeing his dead body, they buried far away from the kingdom however his burial has no respect at all instead of actually burying him they dumped his corpse along with his violin, once they dumped his corpse, a long haired being appeared on his body.

Florencio was raised in Italy, he and his father was very close, he even inherited his talent to him. But Antonio's gambling issue causes his family fall apart along with debt, making him and his mother run away.

Arthur and him are close friends, both of them are born from the 19th century as well as they share fear of Pythia whenever they match with her not because of her being the strongest survivor is it because of her lover.

He have no time for pets because of how busy on his passion in violin. But during his living days, he had a cat, a stray cat during his runaway.

He disliked Archie due to how he got mocked in match. He even despise his long time lover for being brat even Riley himself is the spoiled ones. 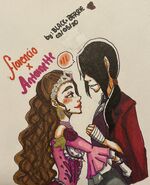 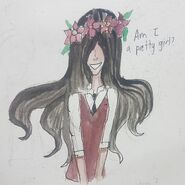 Florencio's Letter to the Antoinette
Add a photo to this gallery
Retrieved from "https://game-high.fandom.com/wiki/Florencio?oldid=13392"
Community content is available under CC-BY-SA unless otherwise noted.