Kaolin is a quiet girl who tends to be quite mellow. She is a bit shy and antisocial, but if you manage to get close to her, she's one of the nicest people you'll meet. ((TBC))

Kaolin is an only child, though this could easily be subject to change, as she is "just" a sculpture made by Elline and Claycia. Kaolin's a little insecure about the fact she was made and not born, but loves her parents nonetheless.

While no one's entirely sure about anything else, her and Aster Occultus get along. She's also gotten into a weird pseudo-friendship with Shard Parisa.

She and her roommate, Ceph, are quite close, and often practice their music together. They've considered performing together, but can't seem to agree on what song(s) to do.

Quincy Clayton often bugs her, but that's somewhat expected. She sometimes goes along with his ideas, mostly because she really doesn't want to get possessed. It's not all bad, but she's generally uncomfortable around him, and never asked for this weird little brother figure.

She is bisexual, but isn't looking. Some people suggest she's crushing on the spider, but she denies this. 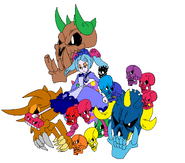 Kaolin (top right) for Halloween of 2016 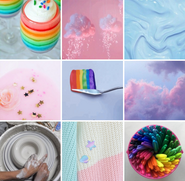 Kaolin aesthetic board
Add a photo to this gallery

Retrieved from "https://game-high.fandom.com/wiki/Kaolin?oldid=9845"
Community content is available under CC-BY-SA unless otherwise noted.