This walking sweet treat is a little...Distant. She likes to hang behind, drawing pictures on her sketchpad and sneering at those who try to watch her draw. She's neat and tidy (even if sometimes she can get crumbs in places). Most notably, Macaron is very, very open-minded. She doesn't care about your gender, romantic, or sexual orientations. She doesn't care if your game sold well or not. She's an avid member of the MACGAI movement. But most importantly, she doesn't understand the distinction between 'heroes' and 'villains'. Macaron doesn't see why a protagonist dating an antagonist is sometimes considered taboo, or why antagonists are taught different things in Antagonist 101 as opposed to the protagonists in Protagonist 101. Is it fair we're teaching some kids to march off to their inevitable, repeated demises? Aren't all villains really the protagonist of their own story? Why bother with such petty labels? Maybe it's because she's from a mobile game that completely lacks any villains, but she just doesn't understand what's up with that. She actively goes out to destroy barriers between heroes and villains and tries to make a better, more fully accepting Game High. Since it's still...Well, a highschool, she hasn't had too much progress. But she'll get there. Someday!

She may be a fan of punk, but this little cookie has a very sweet heart. Since she's open-minded, she's really accepting. Macaron, however, is kind of a fan of blunt honesty. If you don't like your game, well, that's the way the cookie crumbles. If you don't like your fanbase, your sales, your ratings from the critics--Sorry, buddy, some things just never change. But she'll still give you a pat on the back, let you play with Strawberry Short Snake, keep you happy if you need it. If she really likes you, she'll even let you watch her draw. Now, from where she comes from, all cookies have special abilities. With hers, she can flick drawings right off the page--Making bonus little jellies that give her lots of extra points. She'll draw you up a little bear jelly, then flick it clean off the page for you to munch on. She likes pillows and fluffy blankets and general niceness. Macaron is punk. But she's...Soft punk. I guess.

Also, Macaron has grapheme-color synesthesia--Meaning, she sees numbers and letters as also having associated colors to them. So don't be too confused if she incorporates such letters and numbers into her drawings. Or if she helps you with math and things get...A little confusing.

Macaron is short and a little bit chunky. She possesses her father's gingerbread skin (brown), as well as his bright bubblegum-pink hair and shining solid yellow eyes. However--Seeing as she is, after all, a macaron--She also has a buttercream filling that's visible when she turns to the side. For standard wear, she dons a hat that's blackish-blue with cat ears, the right ear bearing two safety pins in the shape on an 'X'. On her body, she wears a very long one-armed sweater bearing a pastel retro video game controller (appearing to be a PlayStation One controller); a black tank top under it. Her leggings are a simple gray, and her combat boots are a strange cream-orange-pink-brown layered sort of combination.

Gumball Cookie is...Sticky. And messy, and a little loud. Not always the best father for a quiet artist. But does that mean she dislikes him? Of course not. She loves her dad and every sticky, gumball-shooting moment. As for the other cookies, she's pretty close with Cherry Cookie, Strawberry Cookie, Cream Puff Cookie, and Alchemist Cookie.

Considering that she's a cookie, though, it's debated if Gumball is actually her 'father'. But she says so. So just go with it.

Scotch is probably Macaron's closest friend. Since they're the leader of the MACGAI movement, both of them get to spend a whole lot of time together, talking about sweets and mobile games and shared experiences. She's very happy that she got to introduce them to her beloved roommate, Parker Gage. And speaking of Parker, she really likes him. Sure, he's a little twitchy, a little bit of a coward, but he's really just a big softie once you get to know him. She's also pretty close with Demerara and Chiffon, but that's no surprise, right?

Macaron, like all other cookies, has a pet that enhances her in some way--Her precious Strawberry Short Snake can fill up gaps by spitting whipped cream (one gap every forty seconds, reduced with upgrades), and when paired up with her specifically, it gives her fifteen percent more experience per run. Not like any of that matters--She just likes playing and snuggling with her precious snake.

Macaron's pansexual, but isn't currently with anyone and hasn't been with anyone before. Kind of boring, really. She knows about the rumors that there's something going on between herself and her roommate Parker, but she won't confirm those rumors mean anything just yet. 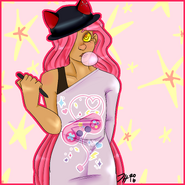 Macaron as drawn by my best friend, Jay.
Add a photo to this gallery

Retrieved from "https://game-high.fandom.com/wiki/Macaron_Cookie?oldid=8040"
Community content is available under CC-BY-SA unless otherwise noted.