He had a flock of birds back in White Lotus Temple

Sora (空) is the son of Fujin, the God of Winds, from the one of the most popular fighting franchise named Mortal Kombat.

Sora is a calm and friendly kind of a person who is constantly gentle towards people around him especially to his fellow young kombatants which often nicknamed as a mom because of that personality. He is also a pacifist when dealing with conflicts on his fellow students which Raijin doesn't like at all.

Despite of him having a calm demeanor, he shows a deep hatred towards to Shang Tsung even his relatives because of how he made him nearly an orphan all because of his father listening to his offer and once he faced one of his relatives he will show his bitterness towards them.

Sora is also open on what humans do such as looking at what they are doing in their daily basis or their lifestyle even it really confuses him especially the human slangs.

Sora was a toned young man, he had a white wavy hair, a golden brown skin with massive scar behind his back and a glowing blue eyes.

Sora's outfit is some what inspired by Fujin's Armageddon appearance, he wore a red kimono like sleeve less top that has air like details, a cream belt that is designed with a golden lace around his hips, a cerulean poofy pants with golden pants chains on the hips and a black lace that reach to his knees and a light blue slip on with grey soles.

Sora has a 2 silver necklace, a silver earrings and some silver bracelets. Ha also has a white cloth around him which similar to Vale from Mobile Legends.

Sora was born after Fujin left the Sky Temple along with partner which is a fellow God like him to live in Earthrealm to be a beacon of hope of the Earthrealms forces, he was filled with unconditional love from both of them when he is born in the world, but everything has changed when his mother was disappeared after a mysterious messenger called her to go to the Heavens, this lost caused him drown in (tw)depression while sister became a rebel causing her to blame his own father for her

After that incident, Sora was grew humbler like his father, he is now willing to protect Earthrealm at all cost like what his father did as well as his uncle.

Sora is family oriented person, he was close to his father ever since her mother disappeared for unknown circumstances (possibly she was killed or imprisoned in Netherrealm).He also had a little sister named Souta which was his sister, they are apparently distant after their mother's disappearance and Kasumi, which he called as a curious chipmunk.

Sora was friends with some Young Kombatants in Game High, but she is mostly close around with Raijin which was his cousin and they are like two peas in a pod. Besides Raijin he is also friends wiith Lixue and Kung Huan.

He owned a flock of birds back in the White Lotus Temple, most of them are sparrows.

He had a deep hatred over any Shang Tsung's descendant even they are innocent but he knew they would inherit his footsteps.

Sora had a romantic relationship with a hunter's child name Ayi'ig, she is pretty possessive with him which he admit its okay as long as its not that excessive. 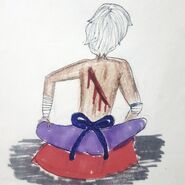 Sora after rescuing Lixue from the tarkatan
Community content is available under CC-BY-SA unless otherwise noted.
Advertisement