TED (Temporary Exploration Device) is the mechanical 'son' of Wheatley, the core that certainly was not a moron from the Valve game Portal 2.

TED is a bumbling idiot. He isn't the sharpest tool in the shed, often pausing and repeating words or parts of sentences, or just starting the whole phrase over again. He frequently misplaces his head, then has to put something else mechanical on his neck, which will proceed to function as his new head. Strange programming. Despite his name, he doesn't seem to be doing much exploring, though he is well aware of the 'temporary' part, often speaking in worry about dismantlement and entropy, since he's aware his mainframe is a bit fragile. He has a weird fear and interest in space, finding it pretty and interesting, but also horribly big and lonely. He's easy to boss around, though why you would want to is another question entirely. He often speaks what's on his mind, blissfully unaware that what he said might...Rub people the wrong way. He's extremely over-emotional. Frankly, TED is only good for listening to him talk a bit, and that's all. Anything else is unnecessary.

But we come back to the fact that his mainframe is fragile. So fragile, in fact, that TED rewired it himself. He puts on a facade of idiocy because that is what everyone expects of him. TED is actually quite bright and observant, and since people do enjoy talking to him just to hear what he will say, he learns secrets pretty quick. He is dead set on being better then his pathetic father, becoming the robot ruler he knows he can be. He enjoys sci-fi, particularly post-apocalyptic stuff, and has a morbid fascination with headcrab zombies. It becomes very clear that he lacks empathy, and not just because he's a robot. He has an impressive amount of mechanical know-how, able to figure out the inner workings of anything technological pretty quickly. True, TED on his lonesome isn't the most threatening beast in the school...But TED in control of something larger (say, a ton of nanobots, or the mainframe of the school, or Aperture Science on a whole)...Now, that's something to worry about. TED likes hearing himself talk. TED knows he can be the best and most brilliant robotic overlord you've ever seen. TED is frighteningly competent, when compared to his father. And all because he rewired himself not to be a moron.

But he'll keep pretending he's a bumbling lout. He needs your trust. Or how else will he build his fabulous robotic utopia?

TED is of middle height, his 'hair' a discolored grey-yellow and his skin a light metallic tone. His head bears two handles and is completely detachable. His eyeglasses are deep blue. His dress shirt is standard Aperture Science grey, with a blue tie around his neck, bearing a small glowing core. On his sleeves are bands made from his own circuitry, in a variety of colors (yellow, dark blue, red, green, pink), though sometimes sparks pop from his elbows and wrists, like circuits should have been there. He wears suspenders, black, attached to large buttons bearing the Aperture Science logo in blue and orange. His slacks are blue and pinstriped white, his tall boots a dark grey.

When TED gets particularly emotional--Excited, mad, scared, what have you--His eyes light up blue. Also, his glasses don't have lenses. He doesn't actually need them. He just thinks they make him look sophisticated.

TED never knew his father. That's fine. As far as TED is concerned, Wheatley is nothing more then space junk and that's all he really should be. Good riddance!

TED was constructed in Aperture Science by two interns under the names of Berninger and Coulton, so they would count as his 'family' by proxy. TED thinks incredibly lowly of them.

TED considers anyone from fellow Valve games his best friends, even if they would disagree. He'll often tag around them, talking incessantly and asking them, y'know, how was your day? Having a splendid time, that's good, yeah...Most of them find it annoying, but he could not possibly care less. They're best friends, and that's that. The ones from his own game especially! EPP follows him around, causing quite a display as she asks questions and he replies in that bumbling, roundabout way of his. She's fun, if nothing else...Though maybe sometimes she can be a bit overbearing. Oh, and Chester! Lovely chap, Chester is. Y'know, he promised not to throw him out into space! Or, at least, TED claims he did. TED seems to enjoy getting all cozy with Chester, hoping to become the bestest of pals. Y'know, like later in life! They're gonna be sublime friends then, TED just knows it. Victoria Johnson, on the other hand...Well, let's just say TED is not getting cozy with her anytime soon and leave it at that.

Note that this friendship in no way applies to The Storyteller, who likes to threaten him with being 'exiled to the Parable'. TED thinks that the Storyteller is a pompous hoity-toity brat, and is totally soiling the good name Valve games had, no wonder it doesn't have a sequel, why does he think he's so special, Stanley Parable began as a mod for L.O.G.'s sake...

Otherwise, he rooms with Scaredy, who he doesn't particularly think to much of. He makes her laugh sometimes, which is nice enough, and she'll listen when he's talking in circles about nothing. He also knows of HALE, wishing to get to know it better.

He's constructing his own personality core in his spare time. Weird, he knows. Her name is Tiffany and she's periwinkle and doesn't do much more then function as a lamp at the moment.

Romance isn't one of TED's programmed features. Sorry, ladies. And gentlemen. And those who fit neither.

Stopping clockwork is much harder then it seems. 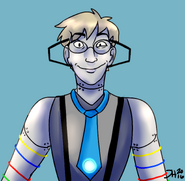 TED as drawn by my best friend, Jay.
Add a photo to this gallery

Retrieved from "https://game-high.fandom.com/wiki/TED?oldid=9129"
Community content is available under CC-BY-SA unless otherwise noted.