Strolling around the gardens, playing her pipa and meditate

Xiao chen ( 萧晨)is the daughter of Fan Wujiu, the Black Gaurd who is bounded in the umbrella conforming Wu Chang from Identity V an asymmetrical survival horror game.

Much like her father, she is extremely stubborn and hot headed woman who always mad at little things around her making Ming concerned about that personality of her because she often getting herself in trouble and sometimes Ming is getting accidentally involved to her troubles. Xiao also loves to mock people like how she mock Antoinette of how bratty she is.

But before her disappearance, she is used to be a gentle and kind hearted girl who easily trusted anybody around making her also a naive young girl who is willing to join anyone in her life without knowing them.

Whenever she is the hunter she is super serious about it and also can be sadistic whenever she caught a survivor.

Xiao is tall young woman who possesses a fair skin with a birth mark on his cheek, a black eyes and a long raven hair that is braided and it also has a white streaks.

She wore a black and white traditional Chinese dress that has slits both sides to expose her legs that is covered with a black leggings with golden hemline and a black dolly shoes.

Xiao's accessory is only her black and white bell gloves with golden details.

She and Ming are sworn siblings much like their ancestor there are the time that they are together and this great bond between them often mistaking them as couples even though they are not. Xiao also like Arthur's presence and she often loved to tease his height.

Xiao didn't like having pets because of her allergy to fur.

Xiao disliked Antoinette's brattiness and because of that she often mock her about that which find it fun to do.

Xiao doesn't like to involve romantic relationship after the force marriage she nearly did to. Her visions about love changes. However it was changed after Ming confessed his love for her which now changed the way love is.

Xiao and her "brother" Ming (art by Inibi Uchiha) 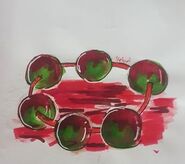 The Disappearance of Xiao chen
Add a photo to this gallery
Retrieved from "https://game-high.fandom.com/wiki/Xiao_chen?oldid=13165"
Community content is available under CC-BY-SA unless otherwise noted.